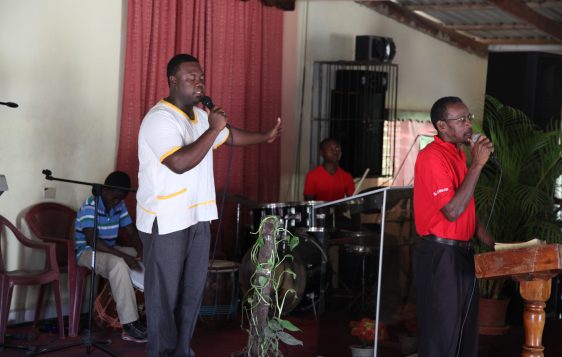 African slaves endured a perilous journey, one that often ended in death often caused by disease. The late 1700s was the peak of trans-Atlantic slave trade and shipwrecks were another cause of those deaths, but the story of the Garifuna people, although tragic, was about life…the kind that is eternal.

In 1797, this West African people group was deported to Honduras by the government from a small Caribbean island called Saint Vincent. Some seventy years before, they had been rounded up from the modern-day countries of Nigeria, Congo and Ghana and put onboard two Spanish slave ships bound for plantations in the “New World.” However, their journey ended near the West Indies island of Saint Vincent when they were shipwrecked and had to swim for their lives.

Once ashore, survivors blended into the indigenous Carib people group and tried to avoid detection by the British, who controlled the island. But in 1796, the Garifuna surrendered to them, and their captors put them in prison where many died from disease. A year later, they were released to the Honduran government and allowed to settle there and on neighboring islands.

Fast forward two centuries to the fall of 1980 when BMA Missionary David Dickson and his family went on holiday to the Atlantic Coast, an hour’s drive from their home. As they enjoyed a day at the beach, they overheard two boys speaking in a dialect they had never heard. As Bro. David conversed with them in Spanish, he learned about a people group called the Garifuna.

God placed a burden on his heart about them, and his research on the Garifuna led him to the national library of Belize where he found an English-Garifuna dictionary and copied its pages. His next stop was Guatemala and the Wycliffe Linguistic Institute where he met Lillian Howland, who shared his interest in this people group.

In the two years following his meeting with Lillian, she passed on her knowledge of the language and coached him as he learned to read, speak and preach in this strange tongue that had no alphabet, no written record, no Bible.

Garifuna is the heart language of these people, and the older ones, who are usually illiterate, had virtually no record of its written form. Young children learn Spanish in school and become bilingual, but the only way to reach the older generation with the gospel is to preach in Garifuna and teach them to read, beginning with the Bible.

In September 1982, Bro. David preached his first sermon in Garifuna and a twelve-year-old boy was saved. His message to the Garifuna was that “Jesus can speak and understand your language, your culture and your needs.” Since that time many Garifuna have surrendered their lives to Christ, been trained and discipled, and have planted churches all over Honduras. Bro. David’s sermons and teachings have been recorded and archived by Lifeword, and they are still being used on current broadcasts now produced completely by Garifuna.

Only five languages have been chosen by Lifeword as “starter languages” included in the beta-testing stage before the public rollout of the new lifeword.org in August…and one of those is Garifuna. To determine the best languages to use, Lifeword personnel considered the following about the broadcasts:

* Are they produced only by indigenous people

* Do they use various media outlets, such as online radio and community radio?

The Garifuna broadcasts can answer yes to all of those questions. Thanks to the burden God gave to Bro. David Dickson 36 years ago, many of these people once bound for slavery have a new freedom and new life in Christ.